Having done WSPR on the MF bands, on 472 kHz, I decided to have a go with WSPR on VHF. There are many challenges opposing the use of WSPR on VHF and this page details my battles with them all. I am a regular VHF/UHF contester in the RSGB UKAC contests every Tuesday night. During those it’s quite easy to get to Germany, Holland, Belgium and France, into Europe from our contest site in JO01cq. I supposed it would be easy to get there on WSPR considering how much more efficient WSPR is…

The first thing I did was naively tuned to the correct frequency and starting hammering out WSPR frames. I observed the following results on a local receiver: 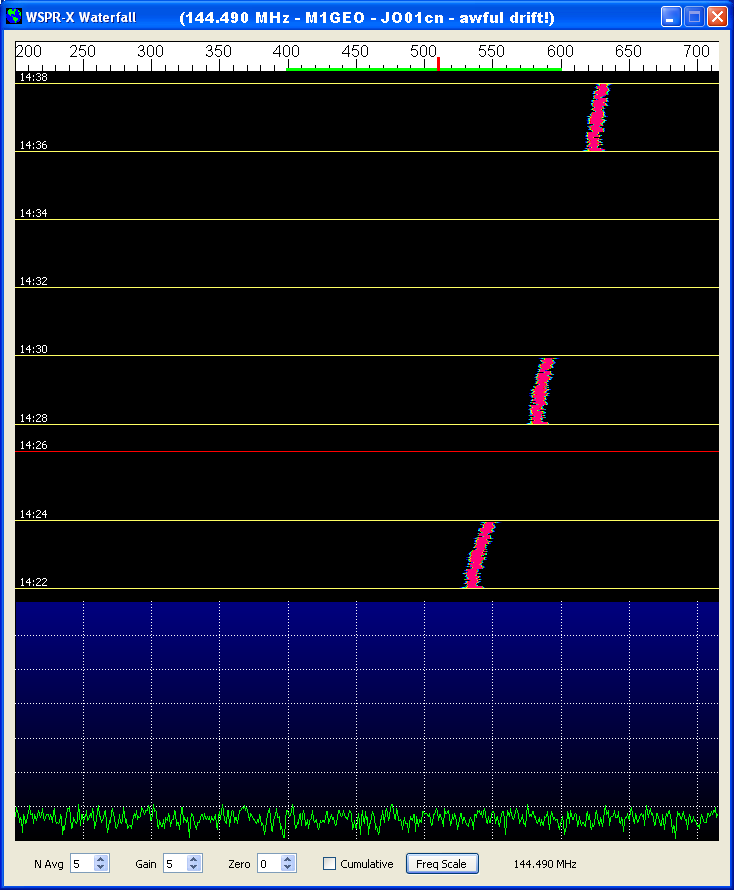 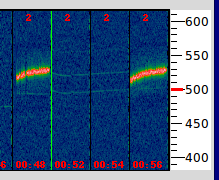 I was getting around a 50% success ratio with decoded frames (locally). Nobody ever received a frame despite people all over the country looking for me (in no particular order and by no means complete, 2E0GPU, M0PAX, MW0DNK, MW0IAN, G4VXE).

I decided to use GB3VHF 144.430MHz amateur radio beacon which I know to be GPS frequency locked [http://www.g0afh.com/gb3vhf/GB3VHFtechnicaldetails.html]. Here I tune the radio using the WSPR-X program for a CW carrier tone of 144.430000 MHz with an audio frequency of 1,500 Hz as used by WSPR. From the dial frequency that gives an exact 1,500 Hz beat tone for 144.430000 MHz USB I can work the offset of the radio. And this works… in the short term. In the image below, you see GB3VHF’s transmit cycle over and over, CW, JT65, phase-pulses, and so on, over and over.

So I tuned the receiver to GB3VHF and went to get a tea. When I come back, the done had drifted up by around 30 Hz: The yellow circle shows me re-tuning again… The big wide bits are the JT65 transmission. 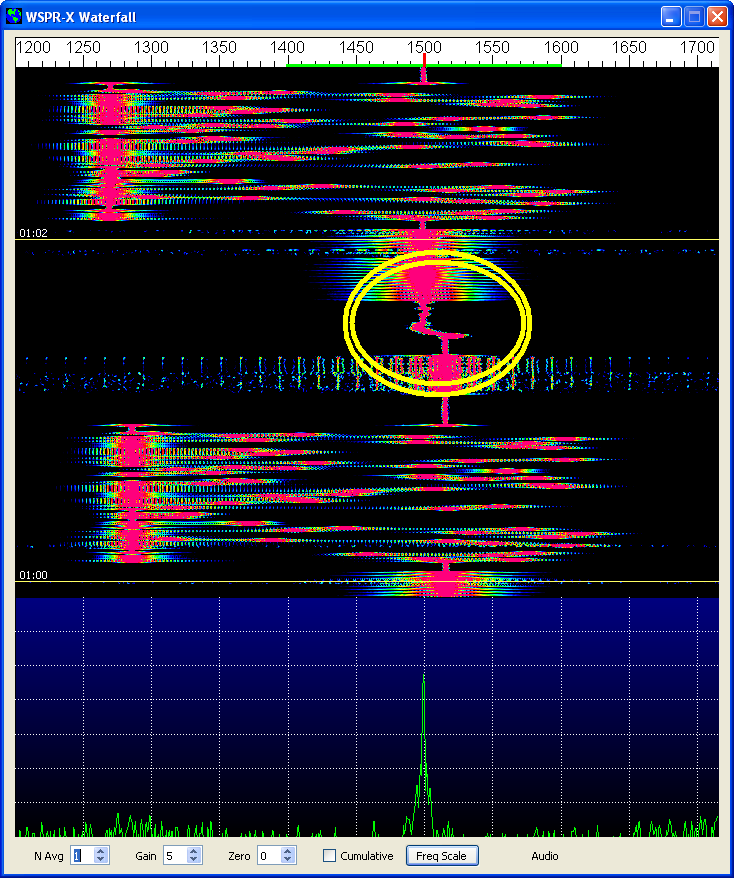 Still I had no idea. The shack temperature was very constant so maybe it was the computer sound card drifting? Seems unlikely? What can I try? the next idea was to transmit on a constant frequency (not over GB3VHF) and see if I could measure the frequency of the radio accurately? I chose to swap to an Icom IC-7400 and used a Racal-Dana 1998 frequency counter as it’s got a 10-digit counter and I locked it to a Rubidium frequency standard that had been given ample time to lock up and stabilise. (My GPS Frequency Standard was somewhat buried). Here’s what I see:

Between the two there is a difference of around 254 Hz, or, in other words, more than the entire WSPR band on 2 meters! More worrying is the range of numbers I could achieve by varying the transmit power (causing varying degrees of internal heating).

Experimenting, I notice that the radio’s frequency output increases at a rate of 1 Hz every 2 seconds at a power output of 100W (worst case). After around 30 seconds this drift stabilised. I fiddled around for a further 20 minutes to get an idea of figured in my head, then scaled the transmit power back to 30 watts and decided to go for an on air test.

I left the transmitter running for a few hours into a dual-band colinear whitestick, cross polarised (vertical) and received 2 spots from G4SMX. My first spots! 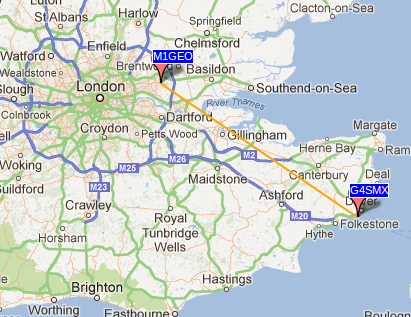 While pleased that someone had heard me at all, I wanted to see what I could do with a proper setup. At this point I decided to try the VHF contest location, in JO01cq. I packed my stuff away, and decided to give it a go.