This silly project stemmed from an idea I had a few years back. I have thought about it for a while now, and then a few days back I decided to give it a go.

I wanted to see if I could use a soldering iron as a tool for measuring the relative temperature in a room. Knowing that the 24v AC Weller iron I have has a simple bi-metallic thermostat, I guessed that I could use the duty cycle of the heater as a means to measure the temperature. I put a small (1 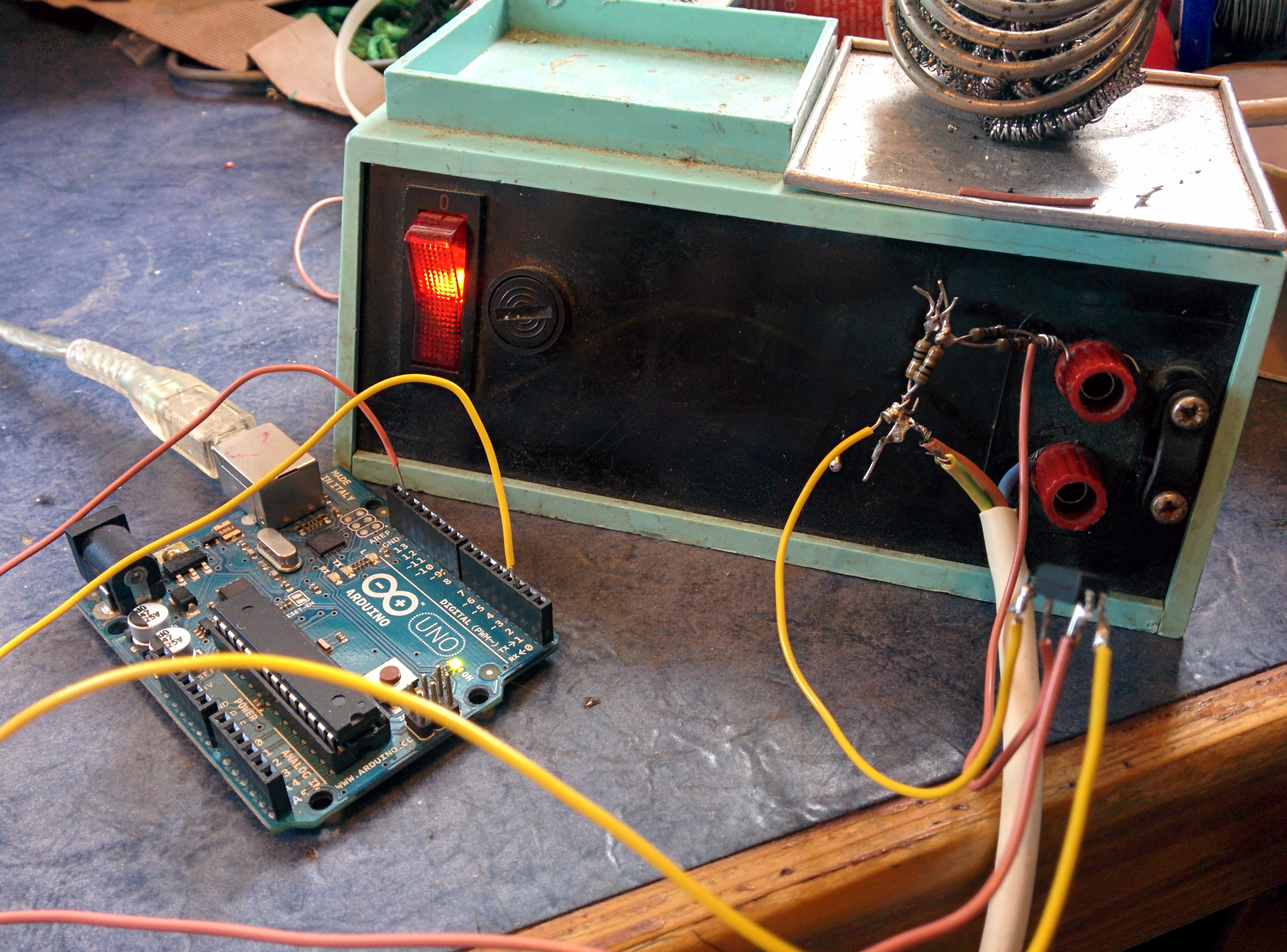 Using an opto-coupler powered from this voltage drop, I was able to feed a signal into the Arduino to display if the heater was on or not. This was a little more complex due to the system being AC powered. Instead of a nice clean TTL pulse train, I received a series of fast pulses (50Hz) since the heater is AC powered. This made the Arduino code a little tricky to write, but essentially is just a few more lines to detect the type of pulse received and then send an RS232 packet on each change of heater state.

Once running, the Arduino outputs truples of data, in the form {timestamp,heater}, for example {4312,0}. These timestamps can be used to calculate the heater duty cycle. Below is a screenshot of the PC receiving the Arduino output. This text is also dumped to a CSV file. This code outputs the graph you see below. The grey is the raw data, plotted as the inverse of the duty cycle, since the hotter the room, the lower the required duty cycle. The black line plots the smoothed (100 sample moving average) data. 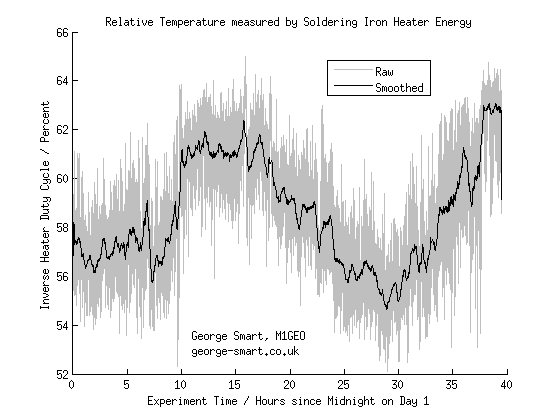 The next step is collate this data with actual temperature data over the same period. I expect a Dallas-Maxim DS18B20 1-wire sensor could also be attached to the Arduino, to take temperature samples when the Iron is operating.

So after more than a year later, I am updating this page. I bought a new Xytronic 168-3CD soldering station, and decided that I would re-try the experiment with (a) a better controlled soldering station and (b) measuring the temperature data. I used some fans to even out the air temperature in a spare house room and had the small windows open for a week.

The new soldering iron had a heater LED, so I used that with an LDR to provide a signal into the Arduino. The code used is the same as before, since the LDR provided more than 2M

resistance in the dark, and around 3k

with the heater LED on – this was enough to provide a digital signal at the Arduino IO, without touching the new iron station. A air temperature sensor was fitted on the Arduino, with code added to sample and report that too.

The code worked great, and we collected the following graphs 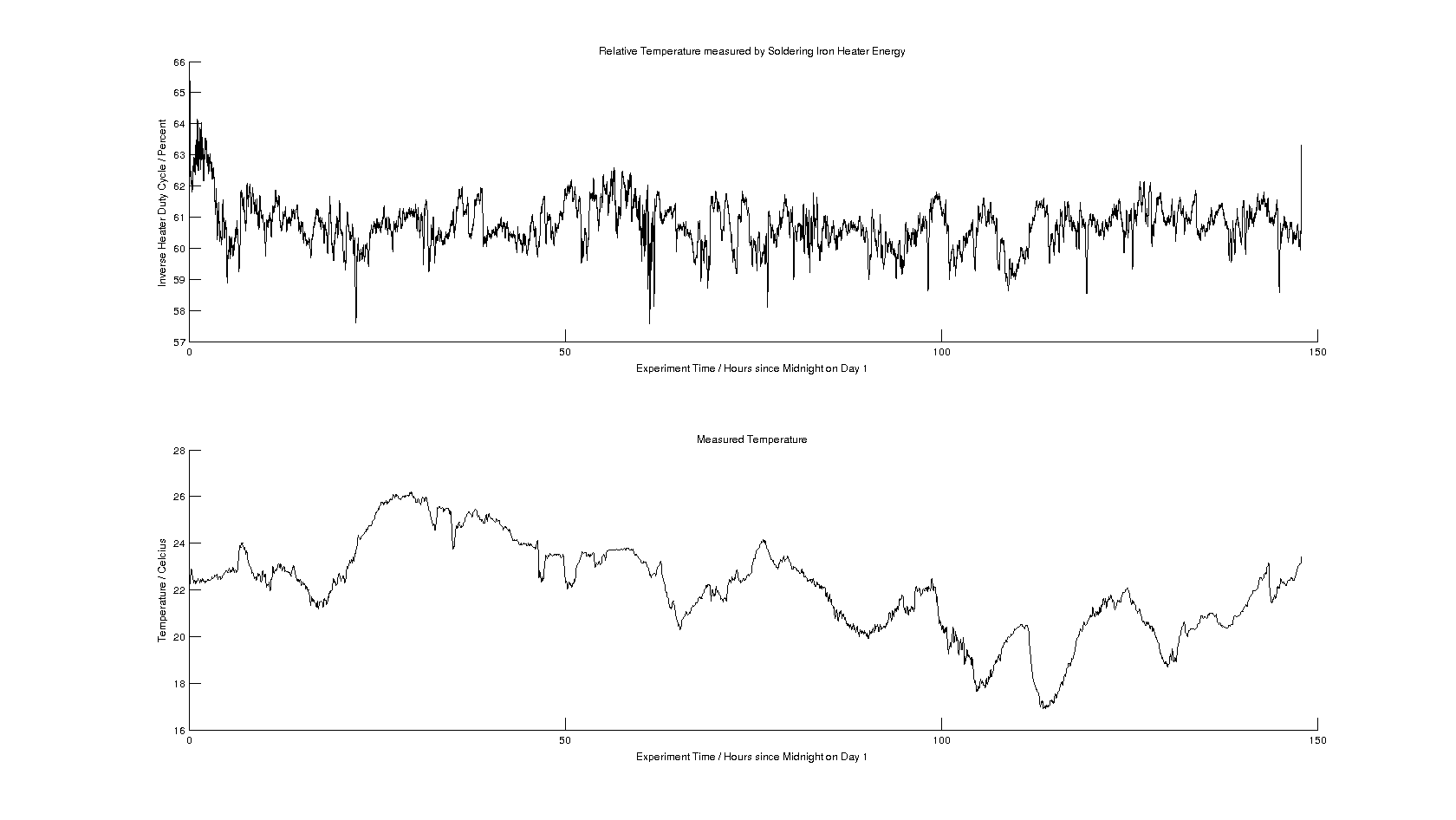 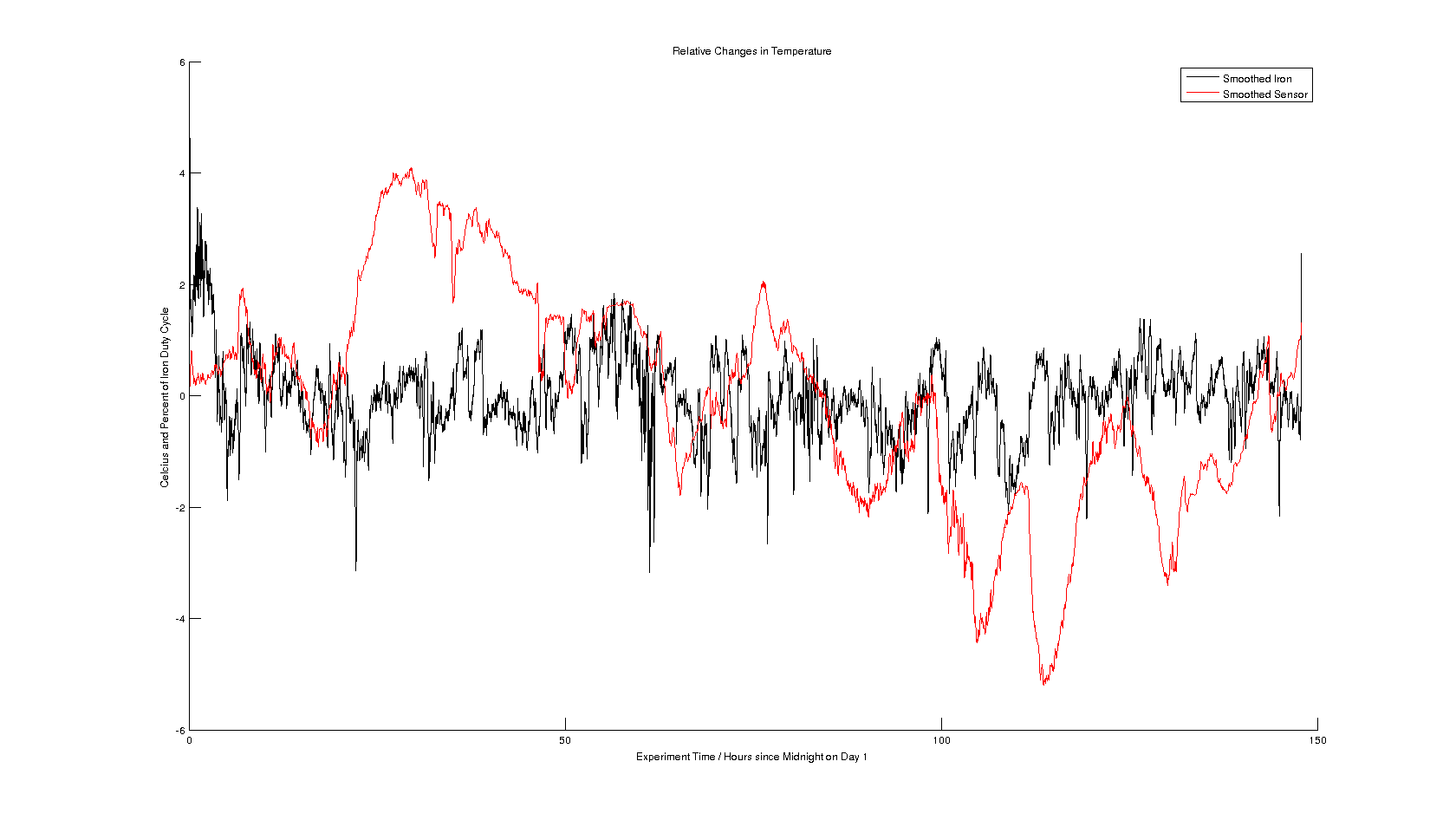 As you can see, the graphs don’t really show much correlation between temperature and iron heater duty cycle. The next attempt will be to try the setup in an outside store, and log to SD card for a few days…