After struggling with the acarsd suite for some time, I decided to give up. I managed to get the installer to run under Ubuntu 10.10, which seems to be more than post people. 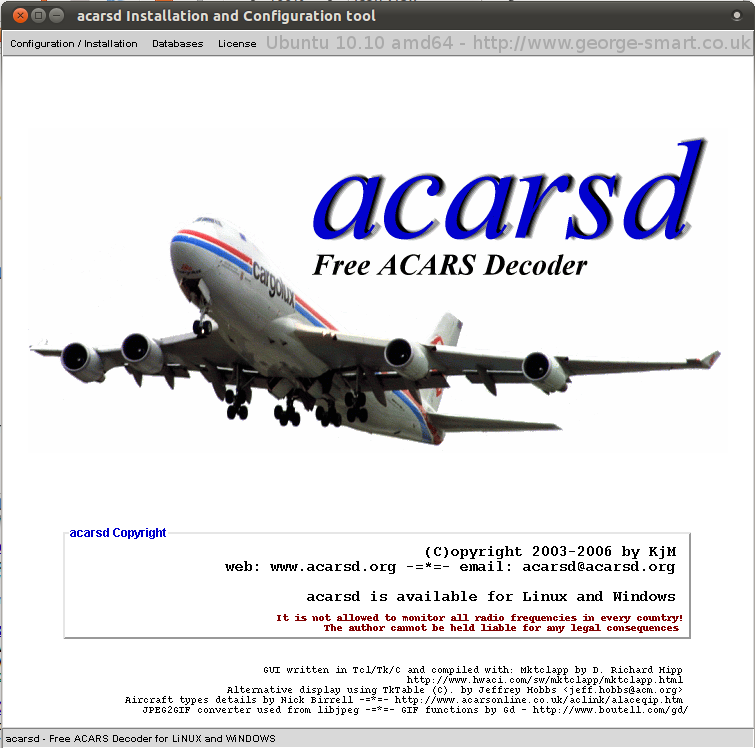 I then had a struggle with the internal libraries; this is when I gave up:

The program doesn’t recognise the only version of the library (from acarsd.org, the official website) then I have no idea how to get it working! Seems overly complex for my liking. It’s supposed to be good software, it’s just trying hard to appear bad!

EDIT August 2014: Stefan Schultheis (OE1SCS) emailed me in response to the above paragraph, saying “You need to copy the library included with the acarsd package to the /lib directory, that’s it – no extra download. It’s mentioned in REQUIRED.TXT.” — I would have likely tried this, but since I was playing with this some years back, it’s likely these issues may have been resolved.

After giving up on acarsd I decided to have a play around with PlanePlotter. Now PlanePlotter is a Microsoft Windows application, and so I was warey of how it would function under Ubuntu (Linux). Excellently, is the answer. I have not found anything that does not work. I am still on the 21-day free trial, but it seems to work very well.

I am using a Yaesu VX-7R Amateur Radio handheld on 131.725 MHz, AM, with the output fed into my PC’s soundcard. The antenna is a

vertical antenna on the roof of the front of the house. With this setup, I managed to obtain some of the following images.